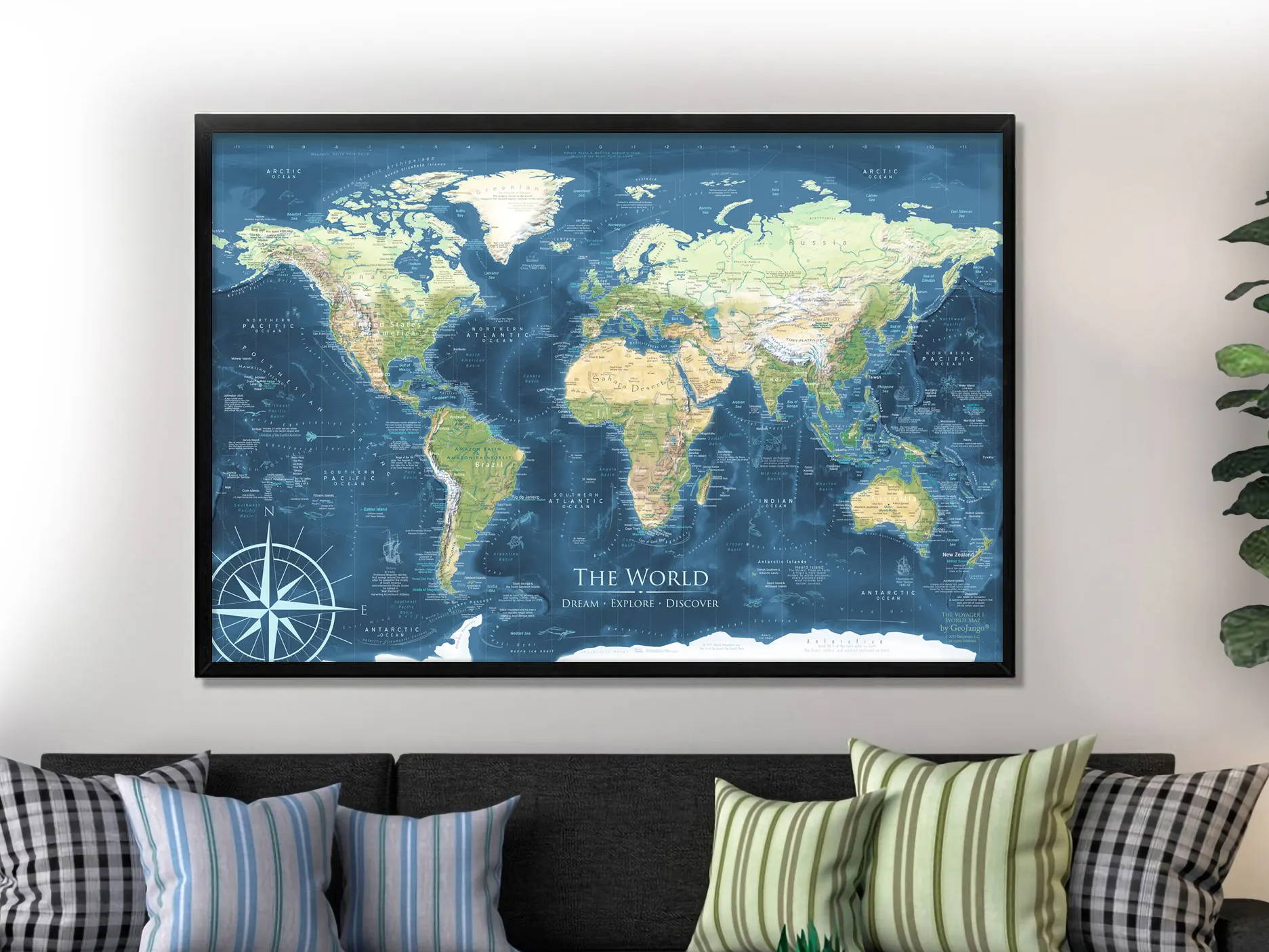 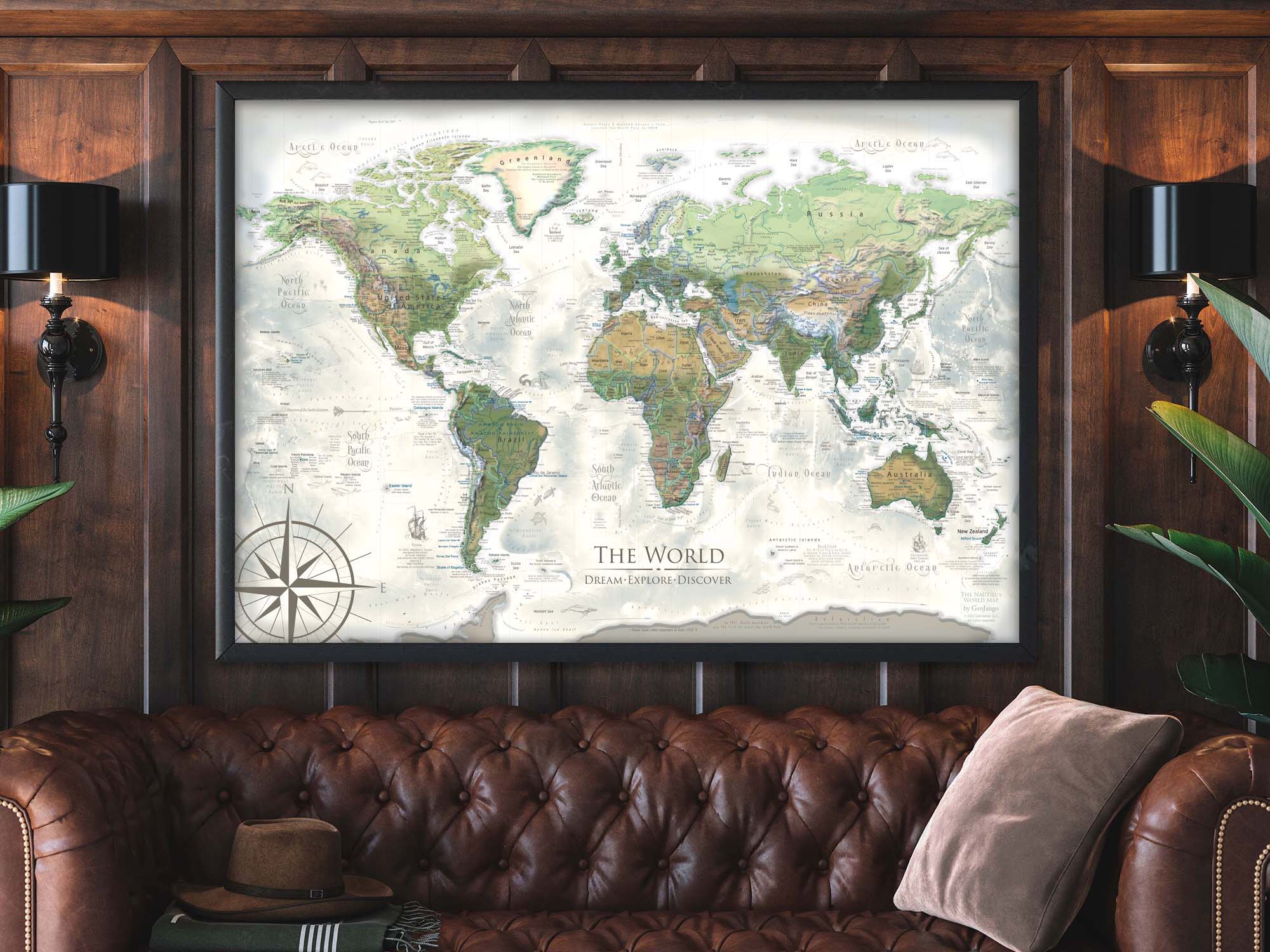 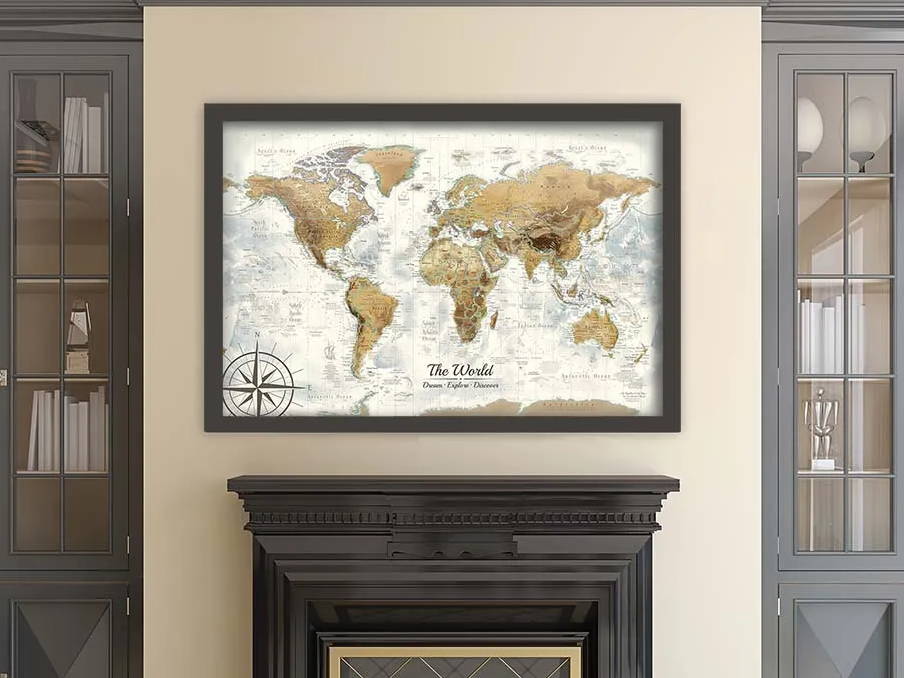 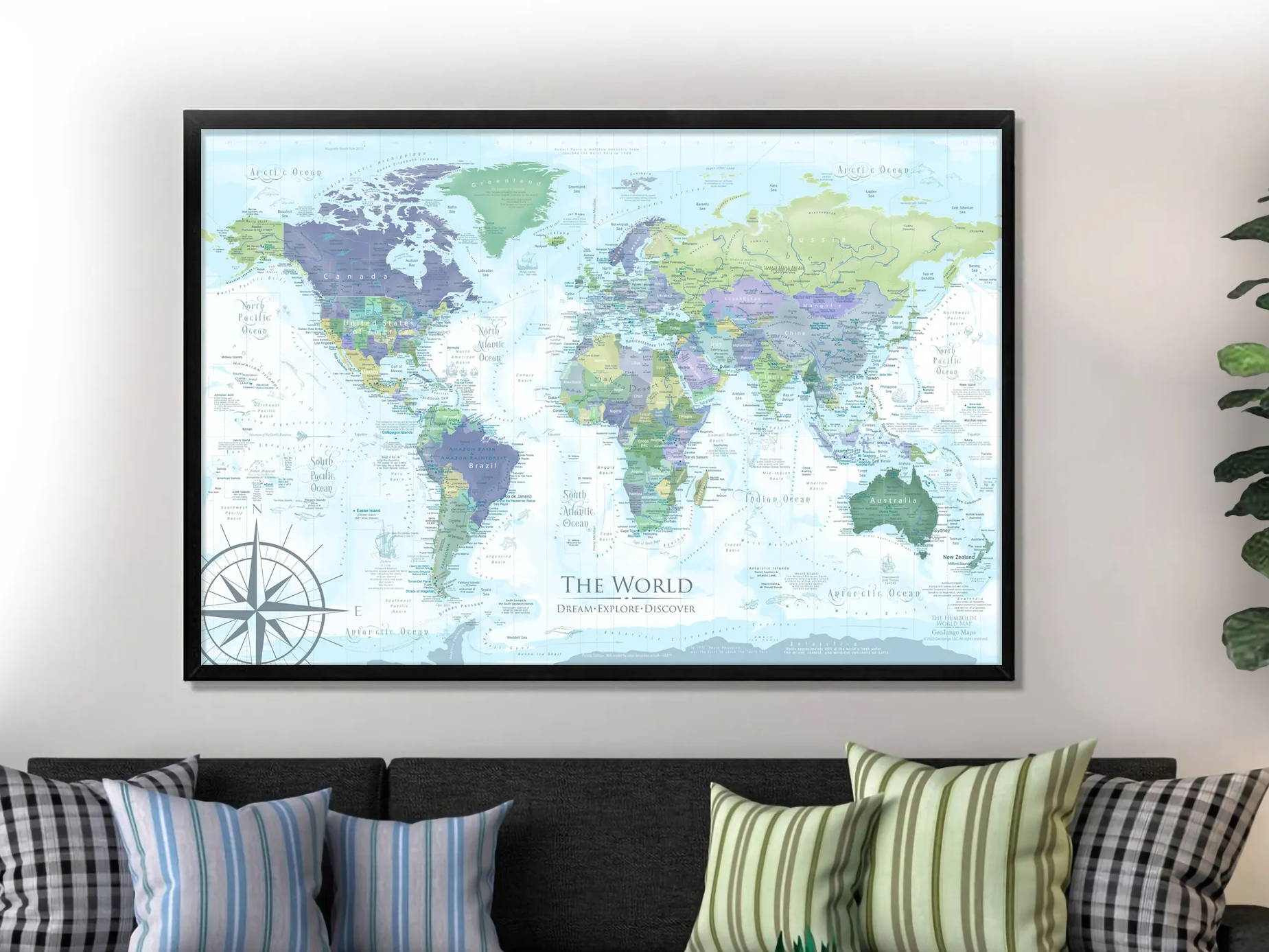 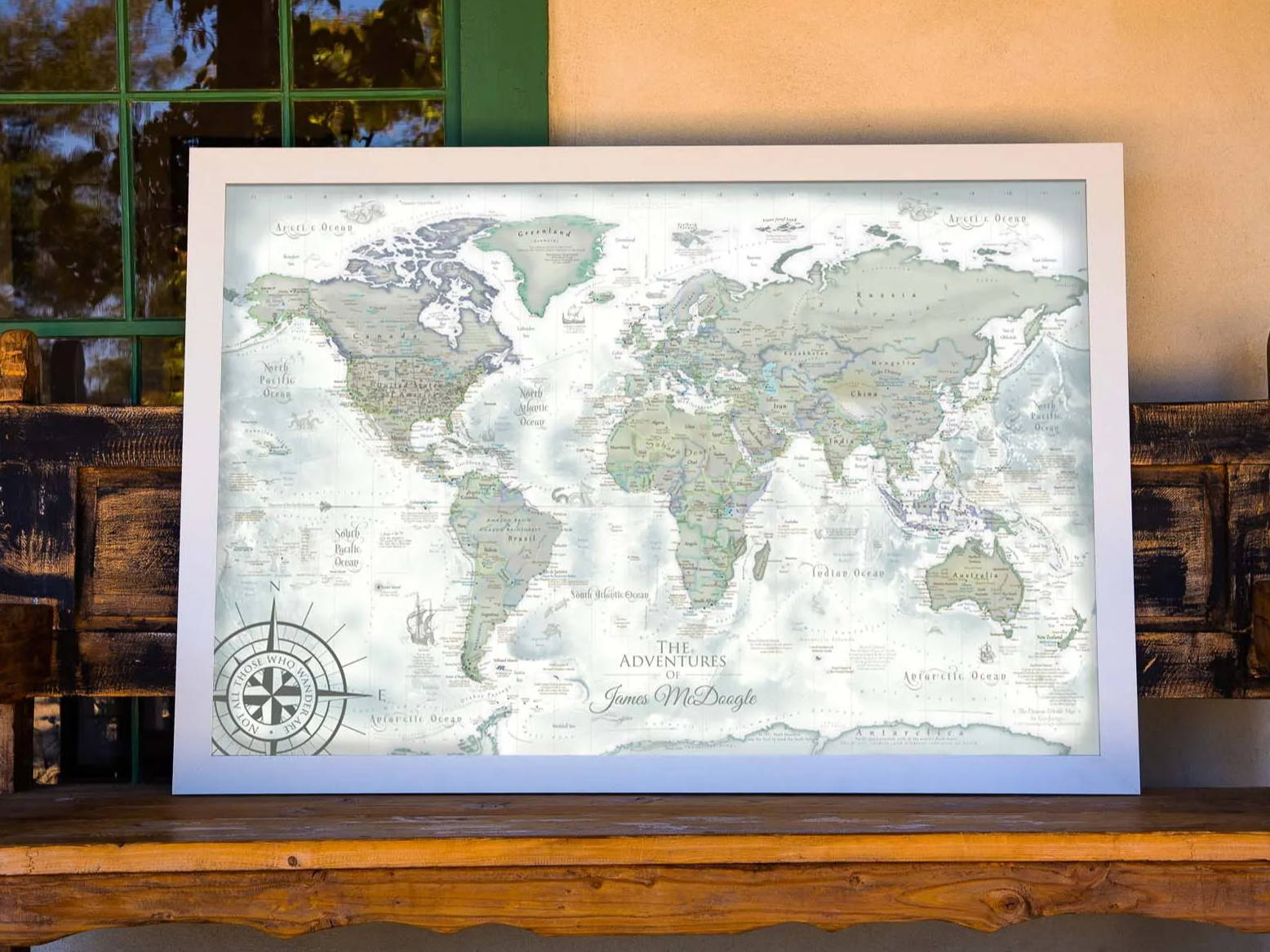 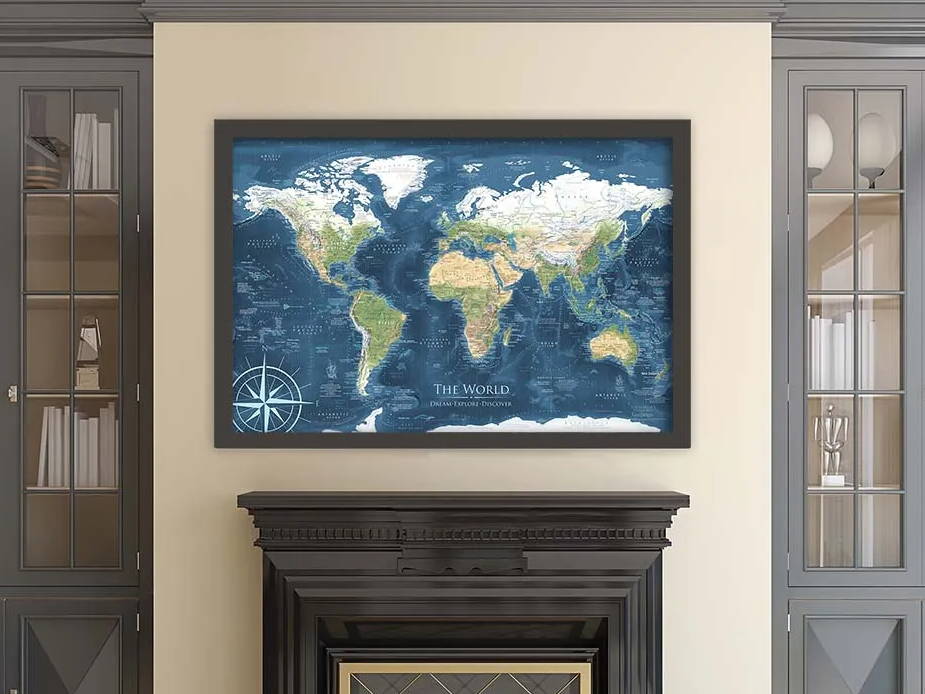 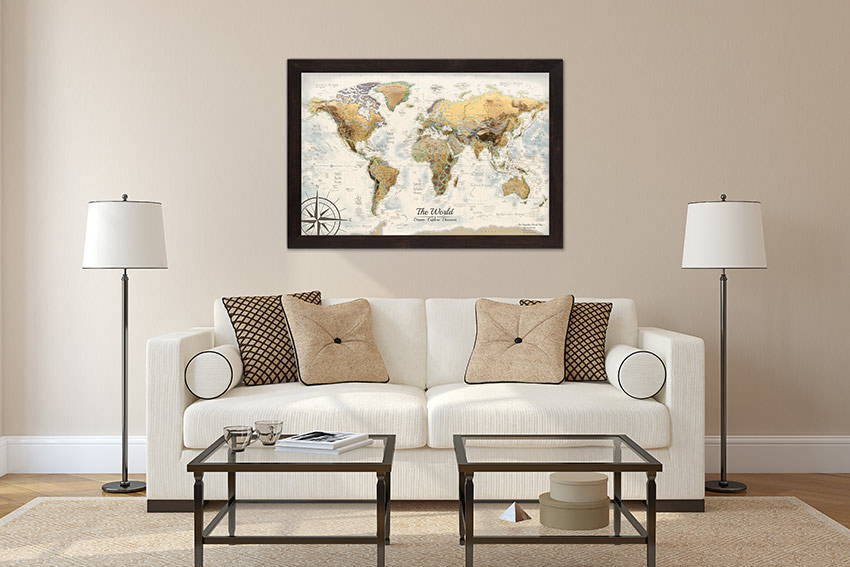 The details matter:  Our products are created by a professional Geographer and Cartographer who has the passion and experience to create impressive maps.

What are the differences between each world travel map?

The main differences are the colors and cartographic styles. The informative details (labeling) are the same throughout the maps with a few exceptions:

The Voyager 2 includes snow/ice modeling. We use the MODIS satellite from the month of February to show the snow/ice landscape - which you can see in the northern hemisphere.

The Voyager 1 excludes the snow/ice modeling, so you are able to visualize the elevation and landscape of the terrain.

The Voyager, Nautilus, Magellan, and Darwin World Maps include modeling of the landscape and terrain (desert, forests, flat lands, and more) and elevation features - which illustrate the mountainous regions. We applied a hillshade to model the sunlight at 3 p.m. consistently around the world. The hillshade provides a 3D effect. It is a flat surface - yet looks 3D due to the incredible modeling technique.

The Endeavor, USS Enterprise, Humboldt, and Columbus World Maps provide a classic look of Earth without terrain modeling. Each of these maps depict beautiful cartographic styles - from modern, sleek designs to antique designs that depict the character of old world maps.

All of the maps feature our ocean floor elevation modeling derived from NOAA oceanic data. This data illustrates the formations of islands, archipelagos, plate tectonics, and ocean currents. 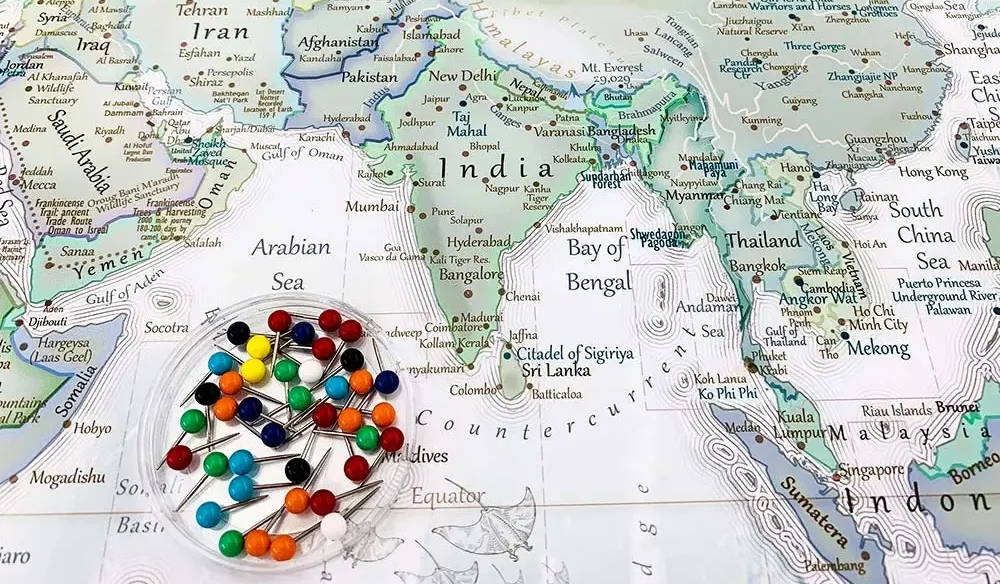 Geographical Information in our World Maps


Our products are perfect for tracking past & future travels.

All of the World Maps with Pins include the same detailed information:

Voyager, Nautilus, and Magellan also include:

Our products are a fun package to open:


You can choose between various titles, fonts and framing options for your World Travel Map. Add your family name or favorite quote to the title or compass so that your map is truly one of a kind.

You can read more about our map customization options with our custom examples. 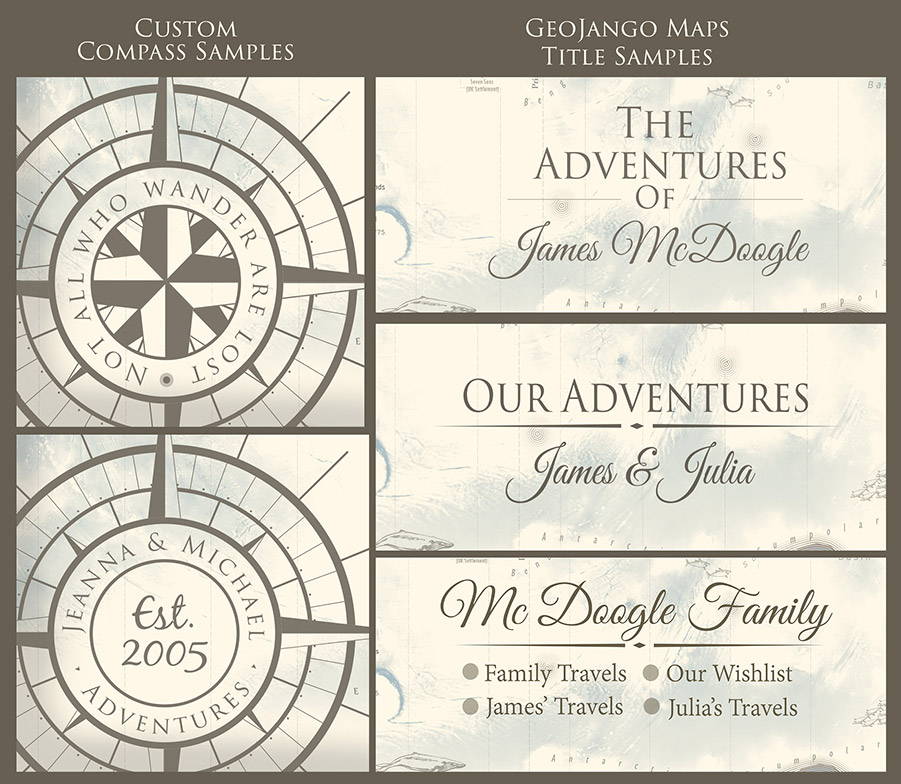 
Our maps can be ordered in a variety of sizes and will accommodate any space within your home or office. Take a look at the video below to see a side by side comparison of our sizes.

We offer maps in three finish types: framed satin paper, framed canvas and canvas wraps. See the video below for a side by side comparison of our finish types.


Every component of this product is made in the USA!

Our maps are produced on the highest quality printer, paper, and archival inks for rich color depth. We mount all of our products to gatorboard, a strong material that's designed to last for a lifetime. 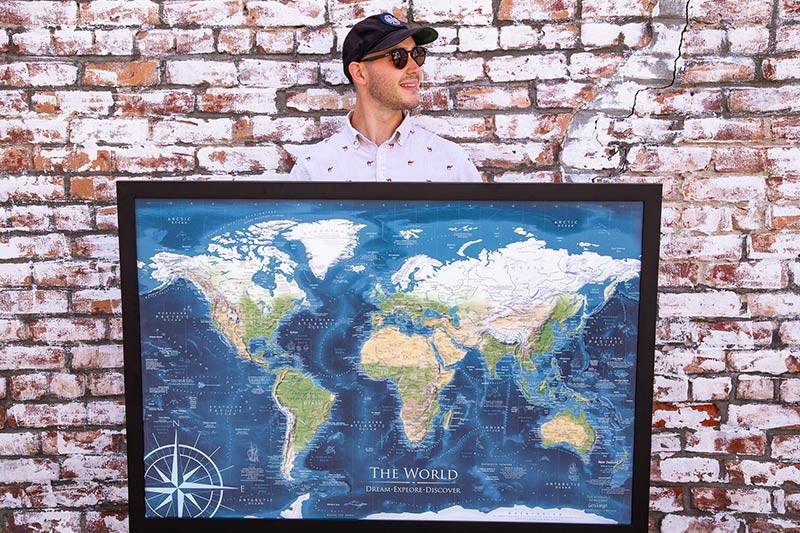 Maps are fun to receive, fun to explore, and fun to cherish.

They are educational and inspirational!

They are great for every age, gender, and occasion.

They are the perfect anniversary gift.

Give your Grad the World! Maps are perfect for celebrating graduation and starting out in the world.

They are perfect to celebrate a newborns's life in our world!

We can add Gift Wrap and include a nicely appointed card in your order.