Within our World Maps you can find the largest lakes in the world, the tallest peaks on every continent, the deepest point in each ocean, and much more. We also feature fascinating travel destinations to help you plan your next adventure. Hang one up in your home or purchase one as a gift for someone who loves to travel!

No matter who you are or where you're from, odds are that you enjoy spending time at a beautiful lake. These landlocked bodies of water are perfect for outdoor recreation and they truly come in almost all shapes and sizes. In fact, there are over 100 million lakes covering about 4% of the Earth's surface.

Lakes can be freshwater or saltwater, natural or man made. You can find them at high altitudes and at sea level. Some are little more than a pond whereas others are so large that you can't see the opposite shoreline.

Since there exists such a great diversity of lakes throughout our planet, it's only logical to wonder which ones are the largest. Take your best guess and then join us as we look at the 5 largest lakes in the world ranked by surface area. 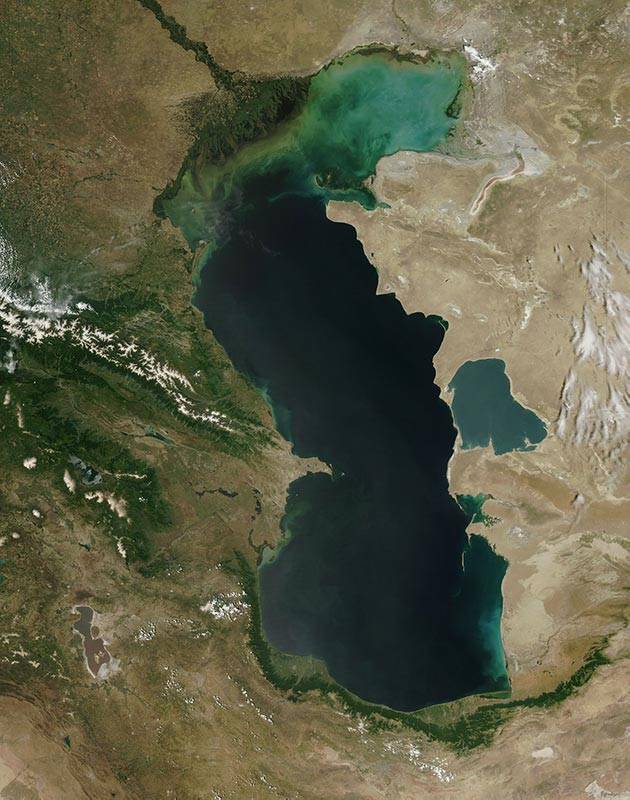 Don't let the name confuse you. While the Caspian Sea has features of both a lake and a sea, it is often regarded as the largest lake in the world. From a scientific standpoint, the Caspian Sea is classified as an endorheic basin, which means that its contents don't flow to any external bodies of water.

However, this was not always the case. Studies have revealed that 11 million years ago the Caspian Sea was connected to the world's oceans via the Black Sea, the Mediterranean Sea, and the Sea of Azov. This is why the Caspian Sea is the only saltwater lake on this list while the other four are all freshwater. 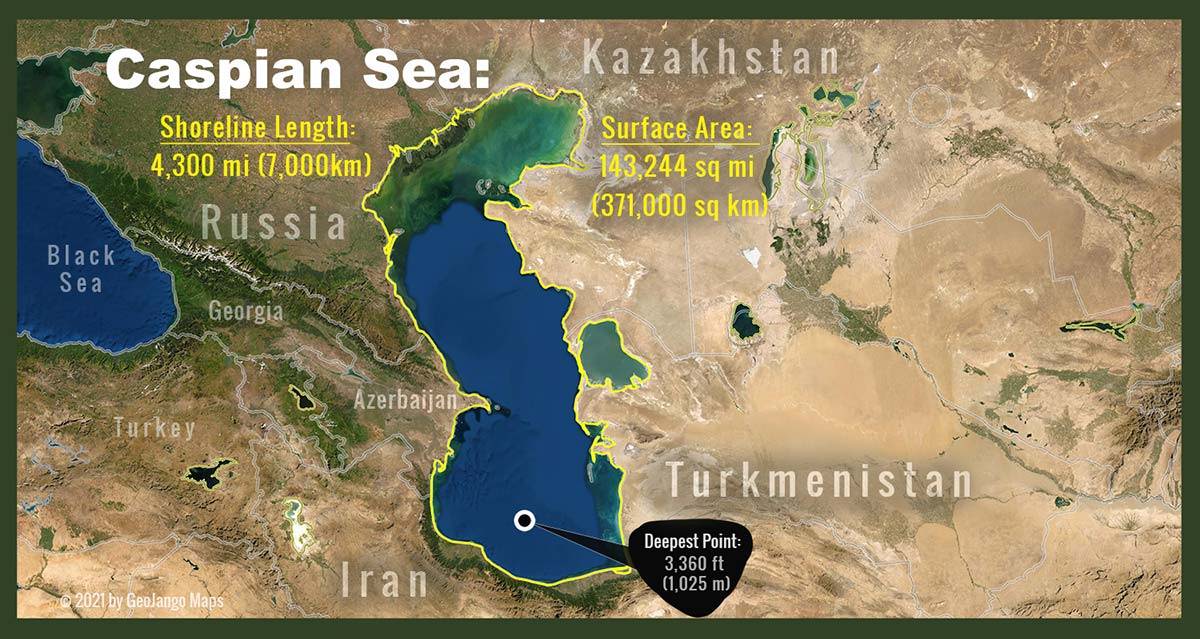 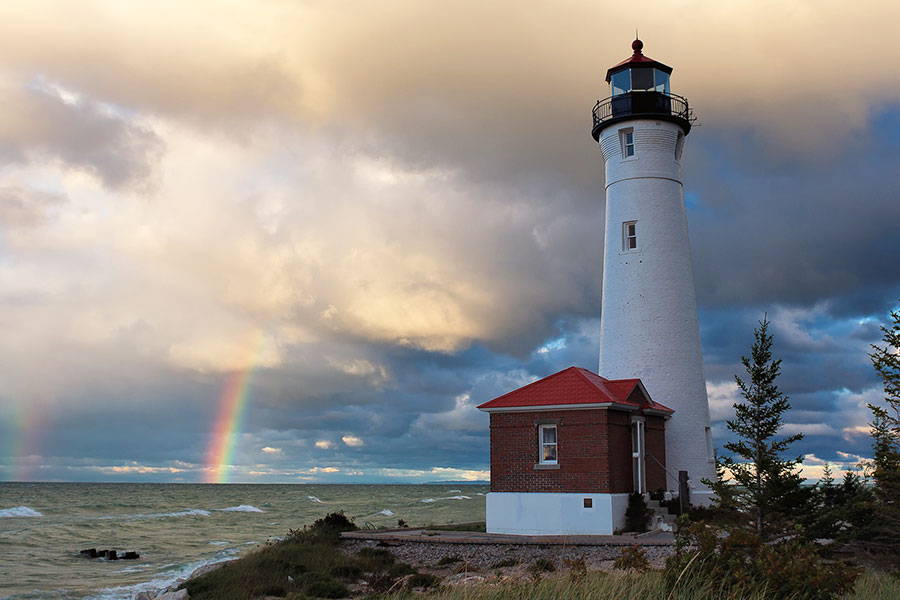 Lake Superior is the largest freshwater lake and the second largest lake in the world by surface area. This body of water was formed some 1.2 billion years ago through the North American Mid-Continent Rift, which almost caused the North American continent to split apart. Luckily for us, the rift failed to produce an oceanic basin and instead produced a freshwater lake that we now refer to as Lake Superior.

Today the lake is shared by two countries (Canada and the United States) and three states (Minnesota, Wisconsin, and Michigan). It is approximately 160 miles wide and 350 miles long with an average depth of 483 feet. Surprisingly enough, Lake Superior contains more water than the other four Great Lakes combined! 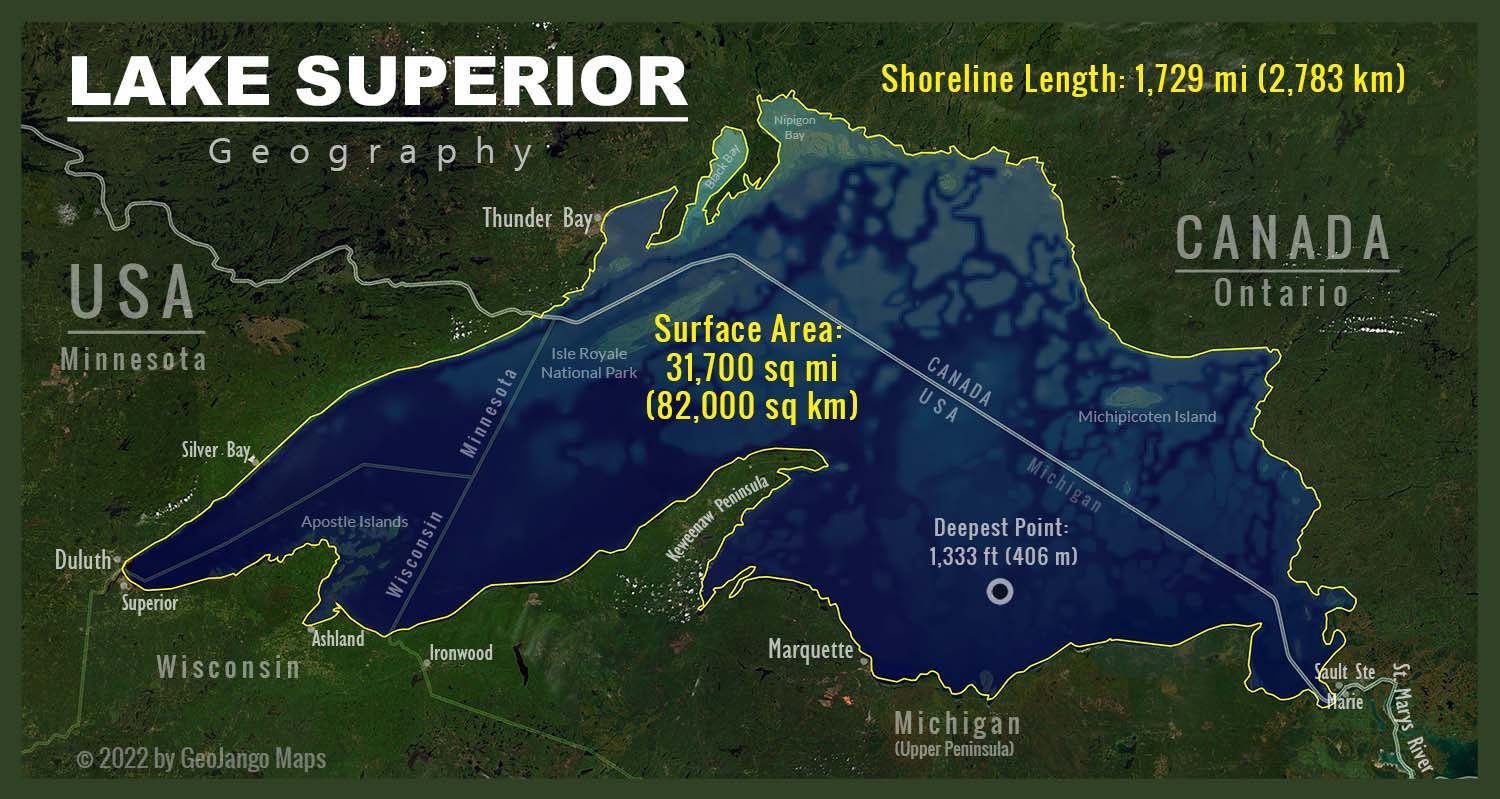 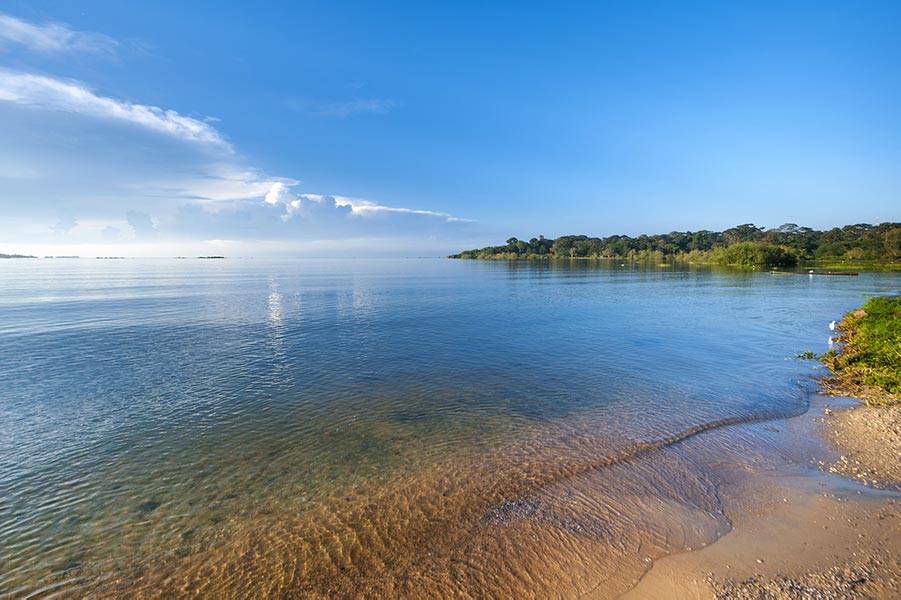 Lake Victoria is the largest lake in Africa, the largest tropical lake in the world, the second largest freshwater lake in the world, and the third largest lake in the world. It was originally referred to as Lake Nyanza until 1858 when British explorer John Hanning Speke discovered the lake and renamed it in honor of Queen Victoria. Speke holds the distinction of being the first European to ever reach Lake Victoria as well as being the first person to identify the lake as one of the main sources of the Nile River.

The lake is primarily located in Uganda and Tanzania, although small portions also reside in Kenya, Burundi, and Rwanda. There are over 3,000 islands as well as numerous archipelagos and reefs within Lake Victoria. Of the total water volume, approximately 80% comes from direct rainfall and 20% comes from relatively small rivers that flow into the lake. 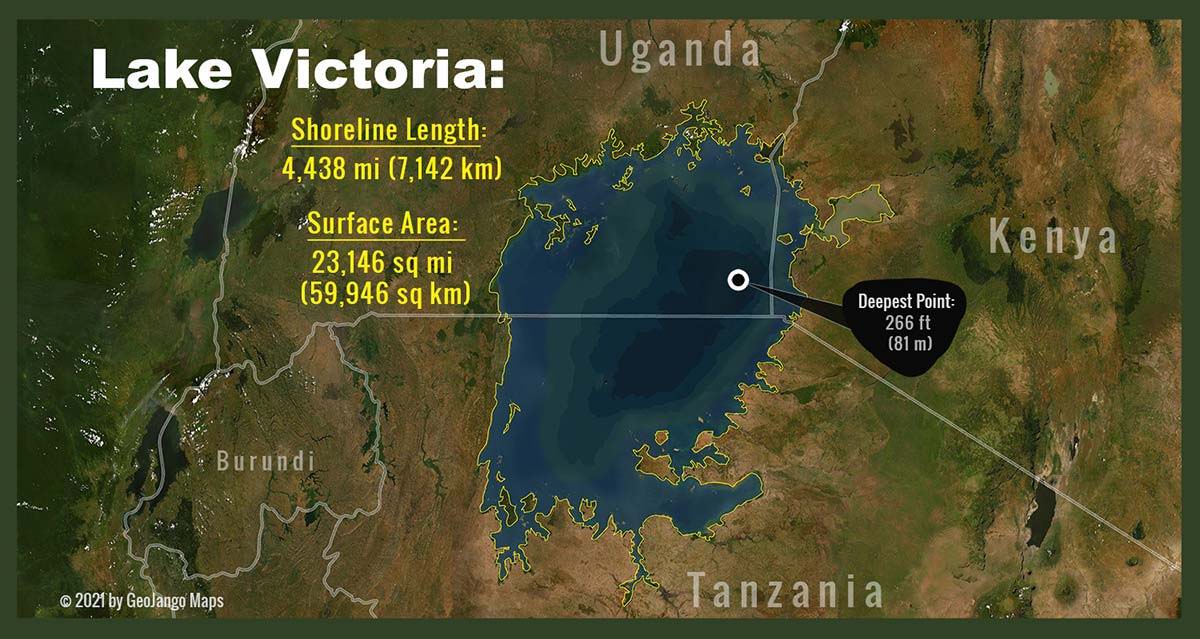 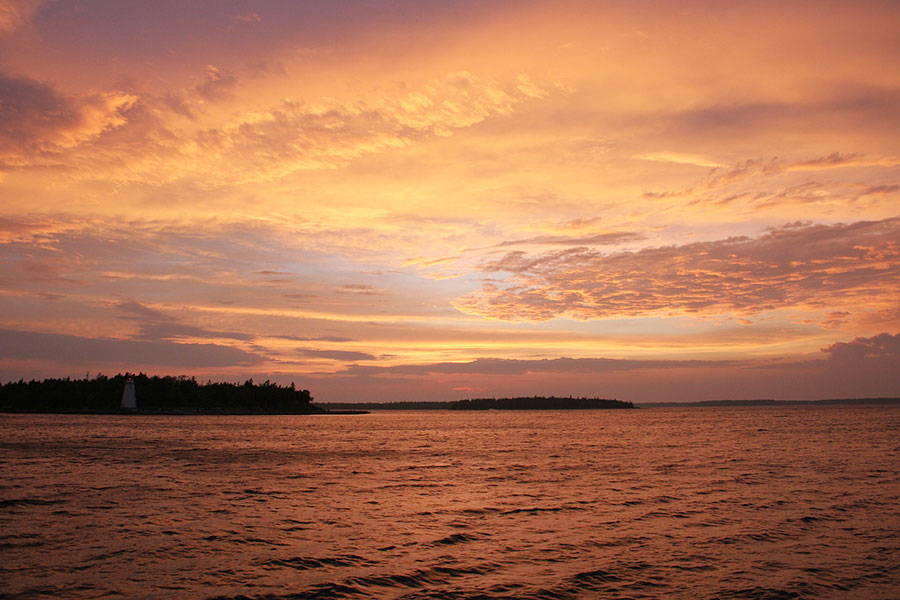 Lake Huron is the third largest freshwater lake and the fourth largest lake in the world. This body of water is home to Manitoulin Island, which is the largest freshwater lake island in the entire world. In fact, Manitoulin itself contains over 100 lakes. Lake Huron is also home to the historic Mackinac Island, which can be found on all of our USA Maps.

The lake was first visited by Europeans, specifically the French, sometime in the 17th century. While it was originally referred to as La Mer Douce/The Fresh-Water Sea, the name was eventually changed to Lake Huron in reference to the Iroquoian-speaking natives that once populated the region surrounding the lake. 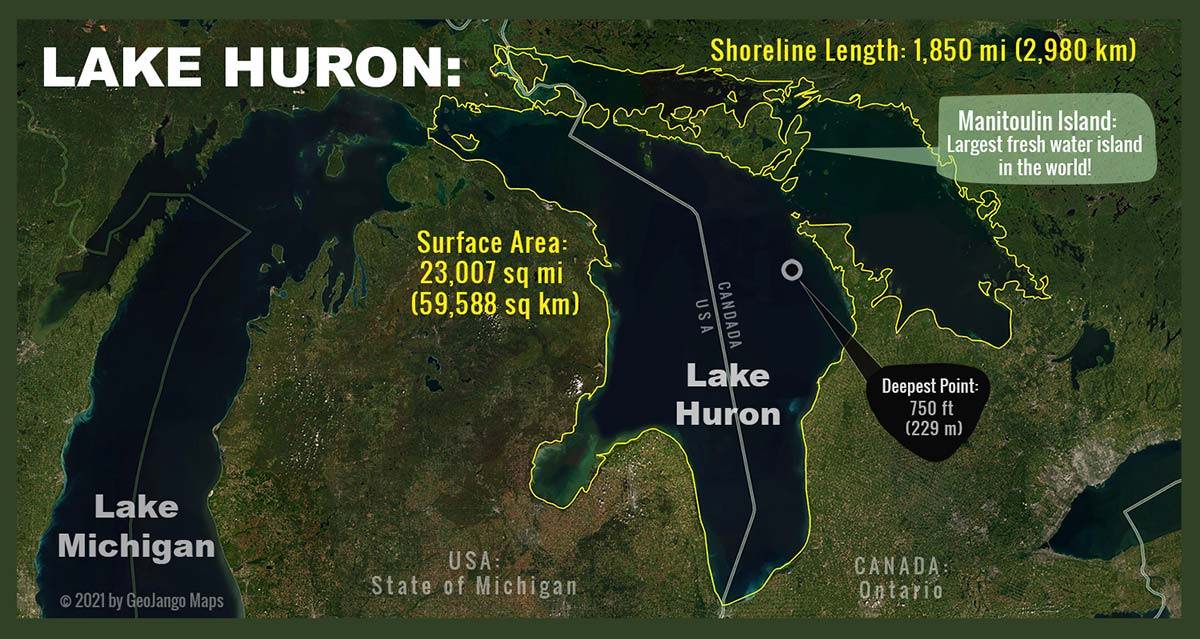 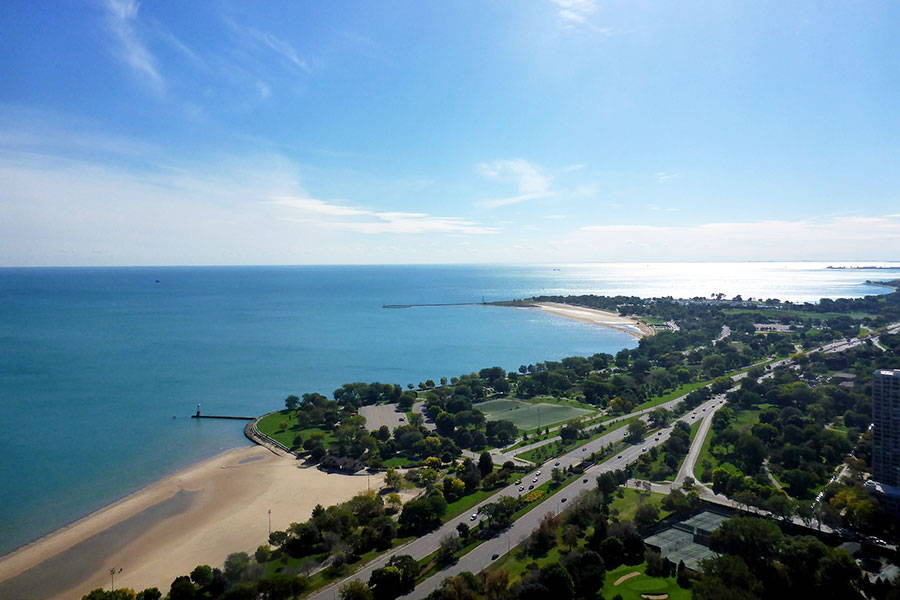 Lake Michigan is the fourth largest freshwater lake and the fifth largest lake in the world ranked by surface area. It's also the only Great Lake to be located entirely in the United States. The name of this lake, and indeed the state as well, is thought to originate from the native Ojibwe word "michi-gami", which means great water.

Oddly enough, Lake Michigan is actually connected to Lake Huron via the Straits of Mackinac on its northern end. While this technically means that the two are the same lake, they are usually regarded as separate bodies of water. 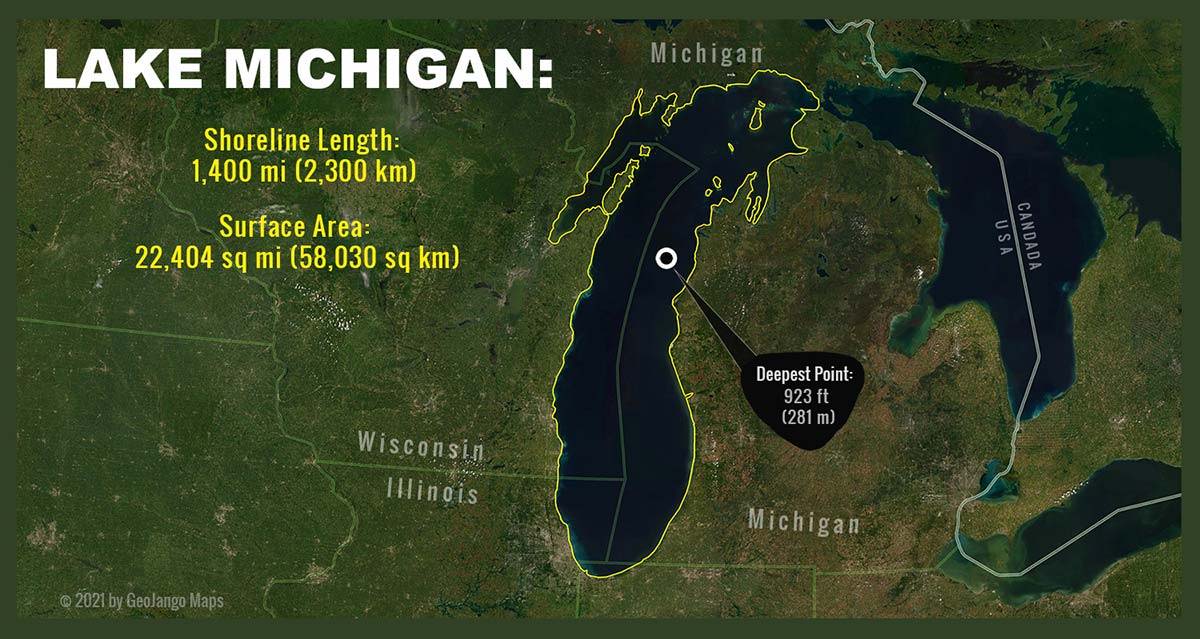 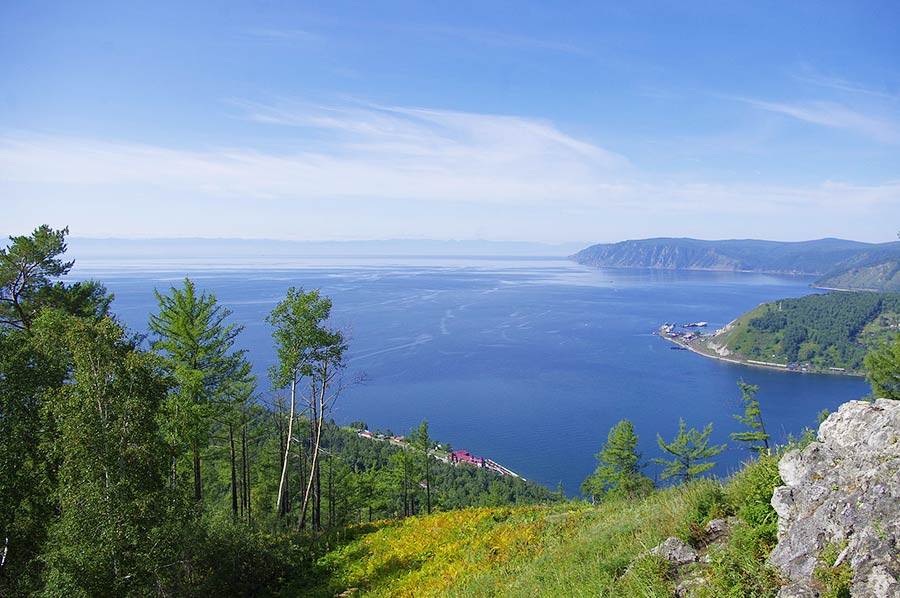 The Deepest Lake In The World And Largest By Volume: Lake Baikal

Although it is not the largest by surface area, Lake Baikal is well known as the deepest lake by volume. Measuring at 5,387 ft (1,642 m) deep, the lake is over a mile deep. This lake accounts for over 20% of the world's unfrozen fresh water which is more water than all of the all of the Great Lakes in the USA combined.
Lake Baikal is located in southern Siberia, Russia. The Trans Siberian Railroad (TSR) runs just south of the lake and hugs along the rocky shores. Travelers on the TSR can take in spectacular views of the lake while also skirting the border of Mongolia. UNESCO declared Lake Baikal a World Heritage Site in 1996 in tribute to its rich and unusual freshwater ecosystem. The lake is known as the 'Galapagos of Russia' for it's unique diversity as a result of the lake's remoteness and age. Lake Baikal is attributed as being the oldest lake in the world that formed 25 million years ago as a result of a rift valley. 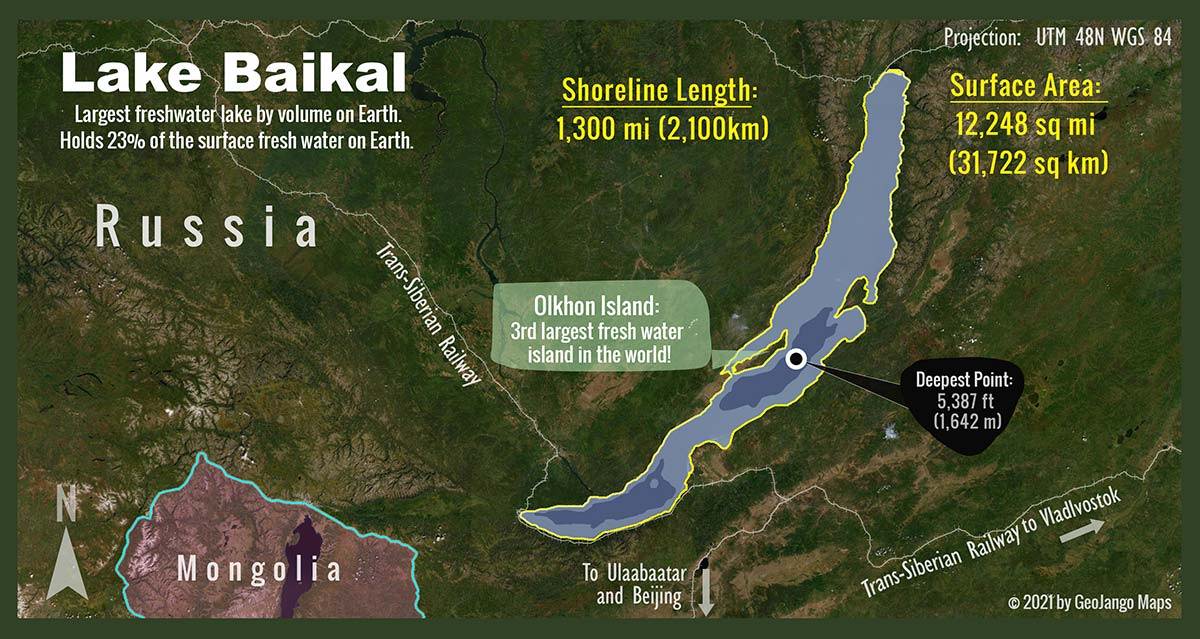 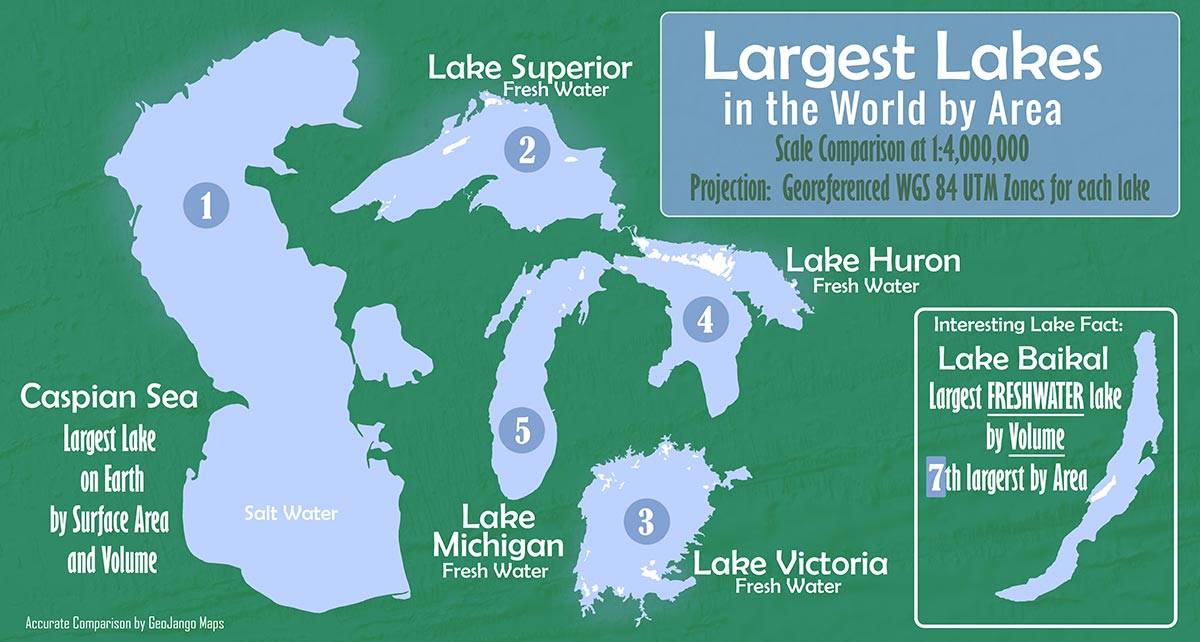 Find These Lakes On Our World Travel Maps 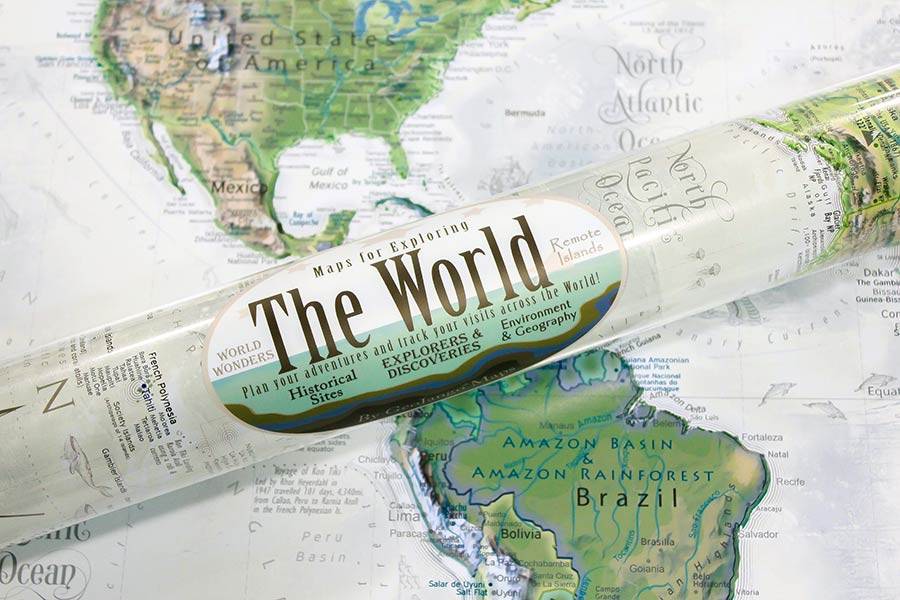 Within our World Maps you can find the largest lakes in the world, the tallest peaks on every continent, the deepest point in each ocean, and much more. We also feature fascinating travel destinations to help you plan your next adventure. Hang one up in your home or purchase one as a gift for someone who loves to travel!

Where does Okeechobee rank, as far as size?

That’s crazy that the Caspian Sea is technically a lake! I would have never guessed. Also interesting that three of the five largest lakes in the world are all in the United States.

Lake Victoria was a surprise!