The National Basketball Association (NBA) was established in 1946 and it quickly grew into one of the biggest sports organizations in the entire world. Today there are 30 NBA teams that each play 82 games every regular season (the 2020-21 season was shortened to 72 games). Once the regular season has finished, the best 16 teams proceed to the playoffs and compete for the coveted NBA championship.

With so many teams and stadium names to remember, we decided to put together this helpful list of NBA teams and arenas. You can use this list of NBA teams to help you track which stadiums you've visited or to learn more about each NBA team and their specific arena.

*See below for information regarding the NBA's new play-in tournament.

How Does The New NBA Play-In Tournament Work?

The NBA Play-In tournament was first introduced at the end of the shortened 2019-20 season while teams were competing in the Orlando bubble. The idea was that this new format would give more teams an opportunity to reach the postseason even if they did not currently hold a top 8 seed within their conference.

The Play-In tournament was still in use during the 2020-21 season but the format changed slightly. While some basketball analysts seemed to have trouble explaining the rules, it's quite simple:

Below are the results from the 2020-21 Play-In tournament: 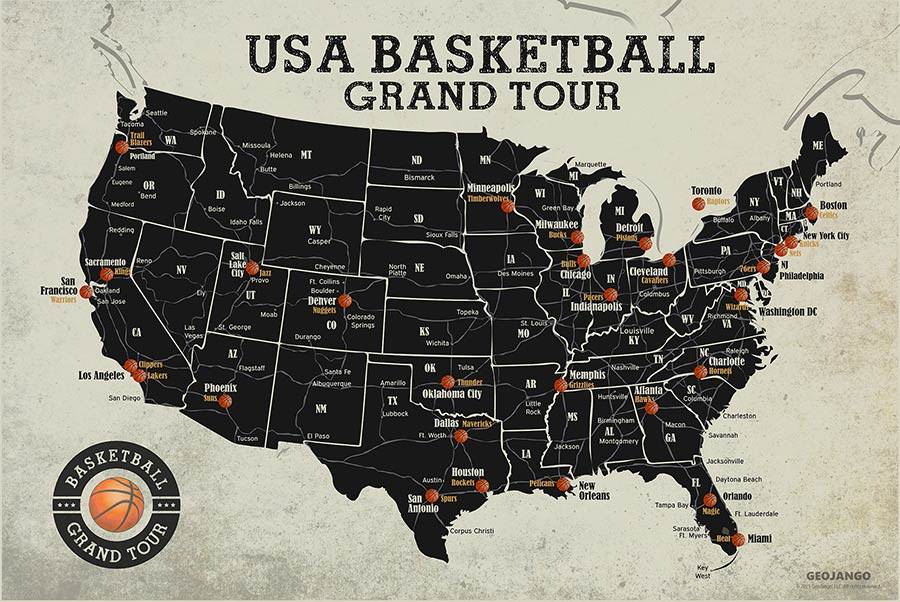 We love basketball here at GeoJango Maps. That's why we decided to create a NBA Teams Map to showcase the locations of every NBA team and their respective arenas. You can use this Basketball Map to keep track of which arenas you've visited or which ones you would like to visit in the future.

It also makes a great gift for basketball fans who can use this NBA Map to decorate any wall in their home or office!

As a special thank you for visiting our website, we're offering a discount code for 5% off any Sports Map Poster! Just enter the code "SPORTSPOSTER" during checkout to receive your special discount.