Visiting zoos is an educational opportunity to learn about animals and habitats around the world.

Visiting zoos provides a great experience to connect with nature and wildlife in our world. Vistitors can learn about diversity in the animal kingdom and their habitats through educational programs and exhibits throughout the parks. Most animals on Earth require specific environmental conditions to survive: from deserts to rainforests to frozen tundras to the depths of the oceans, the landscapes on Earth shape the wildlife and animals that live there.

Zoos are wonderful places to learn about the diversity and needs of animals as well as plants and ecosystems. Zoos and aquariums also provide an active role in protecting endangered species, repairing ecosystems, and often working with wildlife services to help rescue and rehabilitate animals so they can be reintroduced to the wild or simply to survive. Scientists, veterinarians, rescue centers, and staff work to protect and care for wildlife each and every day! Many of the zoos specialize in rescue and rehabilitation for specific species. They can be relied upon as sanctuaries and care when help is needed.

To showcase the top zoos in the USA, we designed a fun Zoo Map to learn about their locations and track your travels to each one! The beautiful artwork of wildlife and animals in the map are hand-illustrated to showcase the beautiful animals that are such a delight to visit and learn about. (Based on the most popular zoos by visitors in 2019)

Disney’s Animal Kingdom is one of four theme parks part of Disney World in Florida. It is the most visited zoo in the United States and broke the Guinness Book of World Records for the most visited zoo in 2019 with 13,888,000 visitors. The park is known for its Kilimanjaro Safari where visitors take a tour in an open-air vehicle tour to see animals roam freely on 110 acres. Disney’s Animal Kingdom is well known for its DinoLand and thrill rides such as Everest and Na’vi River Ride in the World of Pandora.

The San Diego Zoo is world-famous for its size, diversity, and wildlife rescue operations. The zoo caretakers have cared for a renowned record of over 15,000 animals - with some species that cannot be seen anywhere else in the world. The park opened in 1916, making it over one hundred years old. It has a sister park called the San Diego Zoo Safari Park. Their superstar exhibits include Xio Liwu, a giant panda, and Angalifu, a rhinoceros. If you can’t make it to the zoo in person, they have live cameras available 24/7 in some of the enclosures on their website.

The Lincoln Park Zoo is most famous for having free admission since 1868 (over 154 years)! Eighty percent of the zoo’s operating costs are supported by zoo members, donors, and visitors and a subsidy from the Chicago Park District covers the remainder. The zoo is known for its beautiful landscape and gardens with over 1,200 species of plants.

The Saint Louis Zoo was founded in 1868, Lincoln Park Zoo is among the most established zoos in the country.  It recently celebrated the birth of two Amur leopard cubs in April 2022. The Amur leopard is a critically endangered species (one of the most endangered cats in the world) and the births of the cubs are a significant contribution to the population of Amur leopards in North American zoos. In addition, the Saint Louis Zoo has a Dinoroarus dinosaur exhibit for those who wish to learn more about the giant reptiles that once roamed the Earth.

The Houston Zoo’s is the second most visited zoo in the USA with over 2 million visitors annually. Profits go toward helping support 49 wildlife conservation projects in 27 countries around the world! Their work in creating African habitats provides a unique experience in learning about wildlife in a vast and diverse landscape forests, deserts, and the plains of Africa. Opening in 2023, the zoo is hard at work in building a grand Galápagos Islands landscape for visitors to immerse themselves in this special region of Earth. This exhibit will showcase the vast diversity of nature and wildlife with giant tortosies, marine animals, and birds - serving as inspiration for educational experiences and eco-travel.

Brookfield Zoo is also known as Chicago’s Zoological Park and is in the suburb of Brookfield. One of the missions of Chicago's Zooligal Society is to support the habitats of Humboldt penguins and fur seals located in Punta San Juan, Peru, South America. Scientists research and support the study of these animals, their health, and ecosystem. Within the Brookfield Zoo, notable animals include Cookie, a Major Mitchell’s Cockatoo, and Olga, an Atlantic Walrus. If you are interested in what happens behind the scenes of the Brookfield zoo, you can check out Dr. Mike’s Video blog where he share information about the care and needs of the animals.

Omaha’s Henry Doorly Zoo and Aquarium opened in 1894. In 2021, the zoo and aquarium celebrated a milestone in their repatriation of Western boreal toads: releasing their 100,000th amphibian into the wild. The Henry Doorly Zoo and Aquarium is known for its Alaskan Adventure splash grounds and the Desert Dome: an inside desert environment biome. This world-class zoo is famous for its dedication to breeding endangered species from around the world. Its mission is education, conservation, research, and recreation.

The Denver Zoo was founded in 1896 and is the most visited paid attraction in the Denver metropolitan area. If you want an up-close and personal experience with animals, the Denver Zoo offers Up Close Looks for small groups to enjoy an animal meet and greet.

The Como Park Zoo and Conservatory is unique in that there are over 384 acres of zoo and gardens to explore. Art is interspersed throughout the park and there is a frog conservation exhibit called the Ribbit Zibbit that incorporates both animals and plants inside the Leonard Wilkening Children’s Gallery. Admission is free but at the time of writing reservations are required. 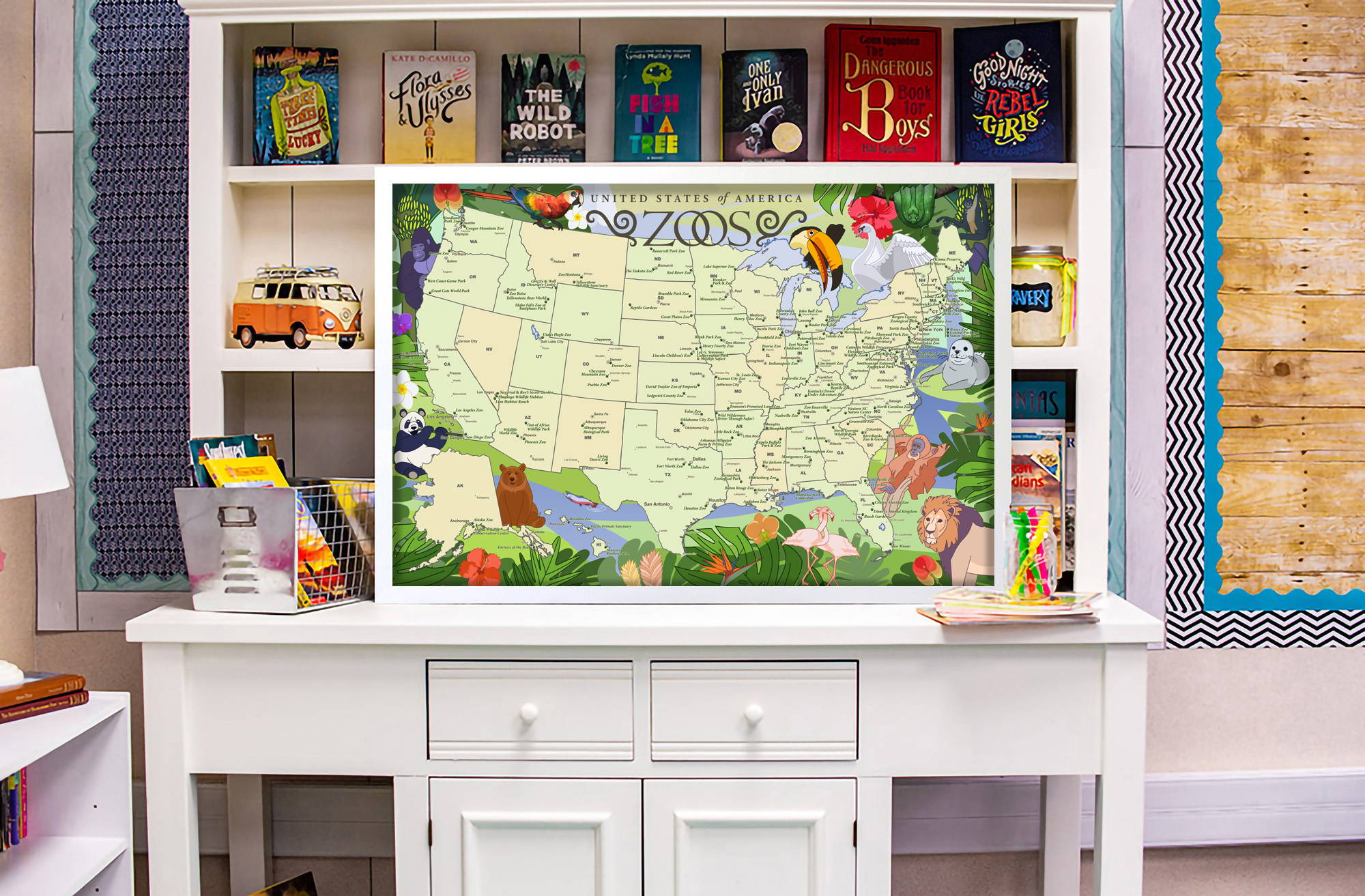 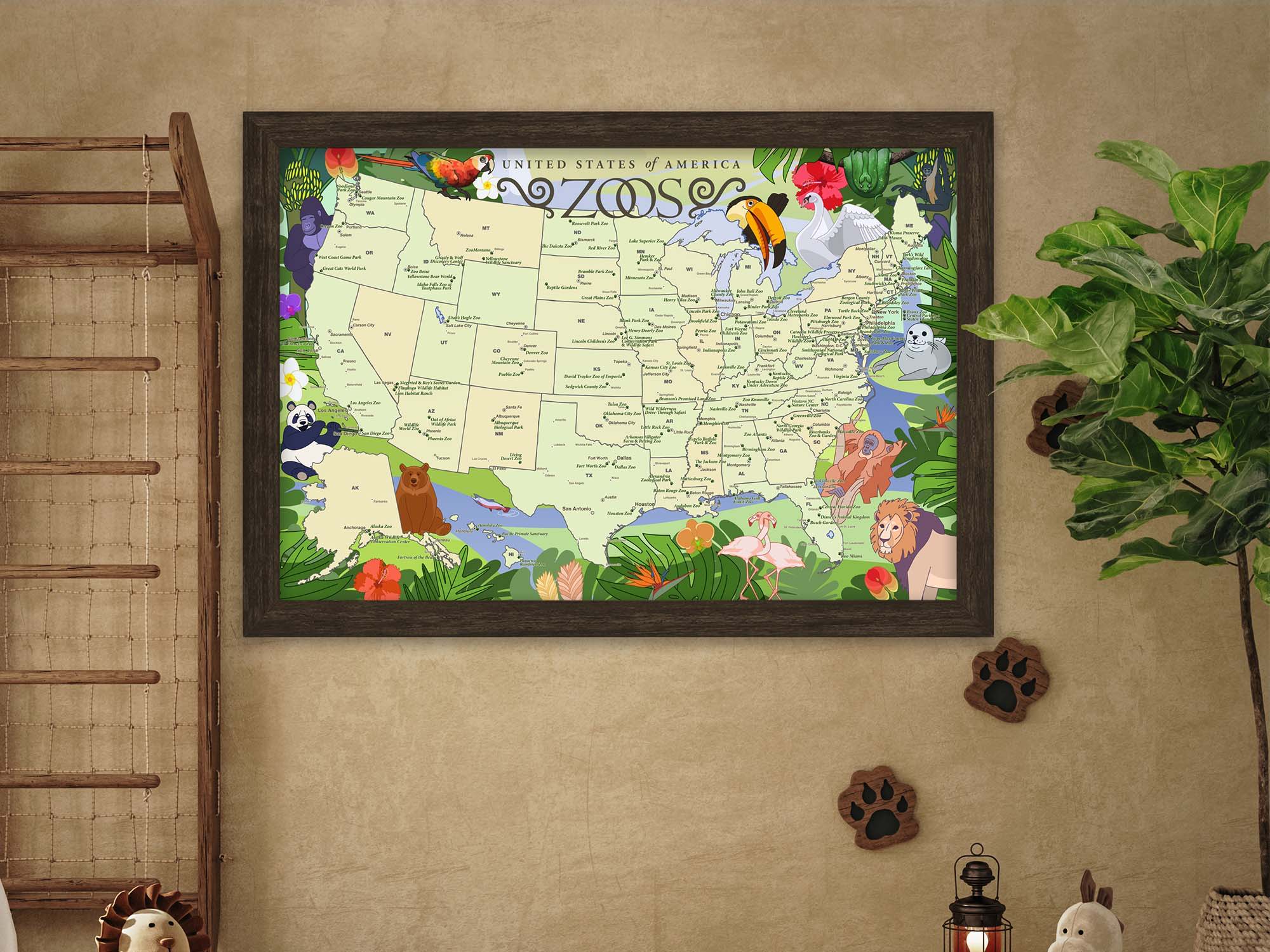 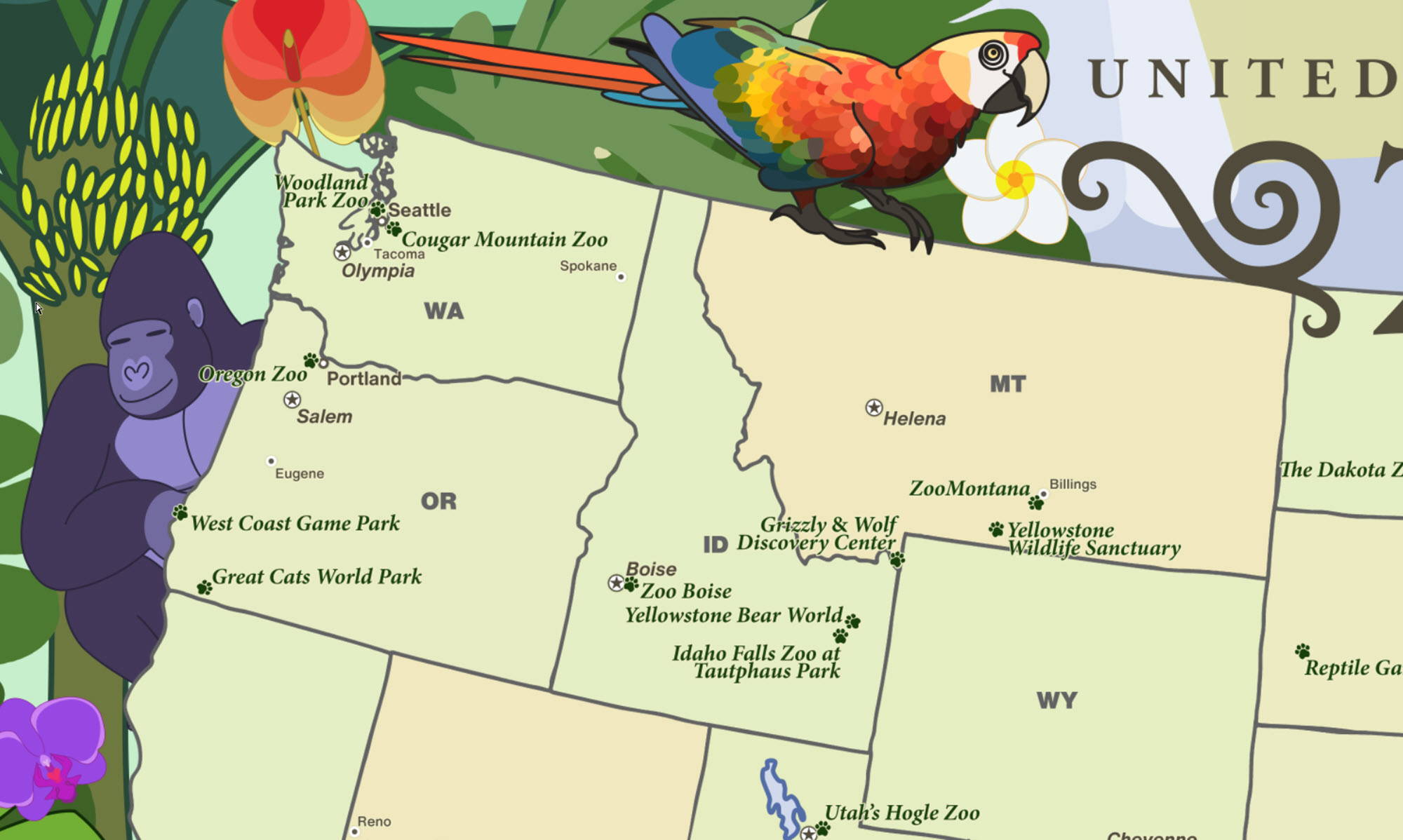 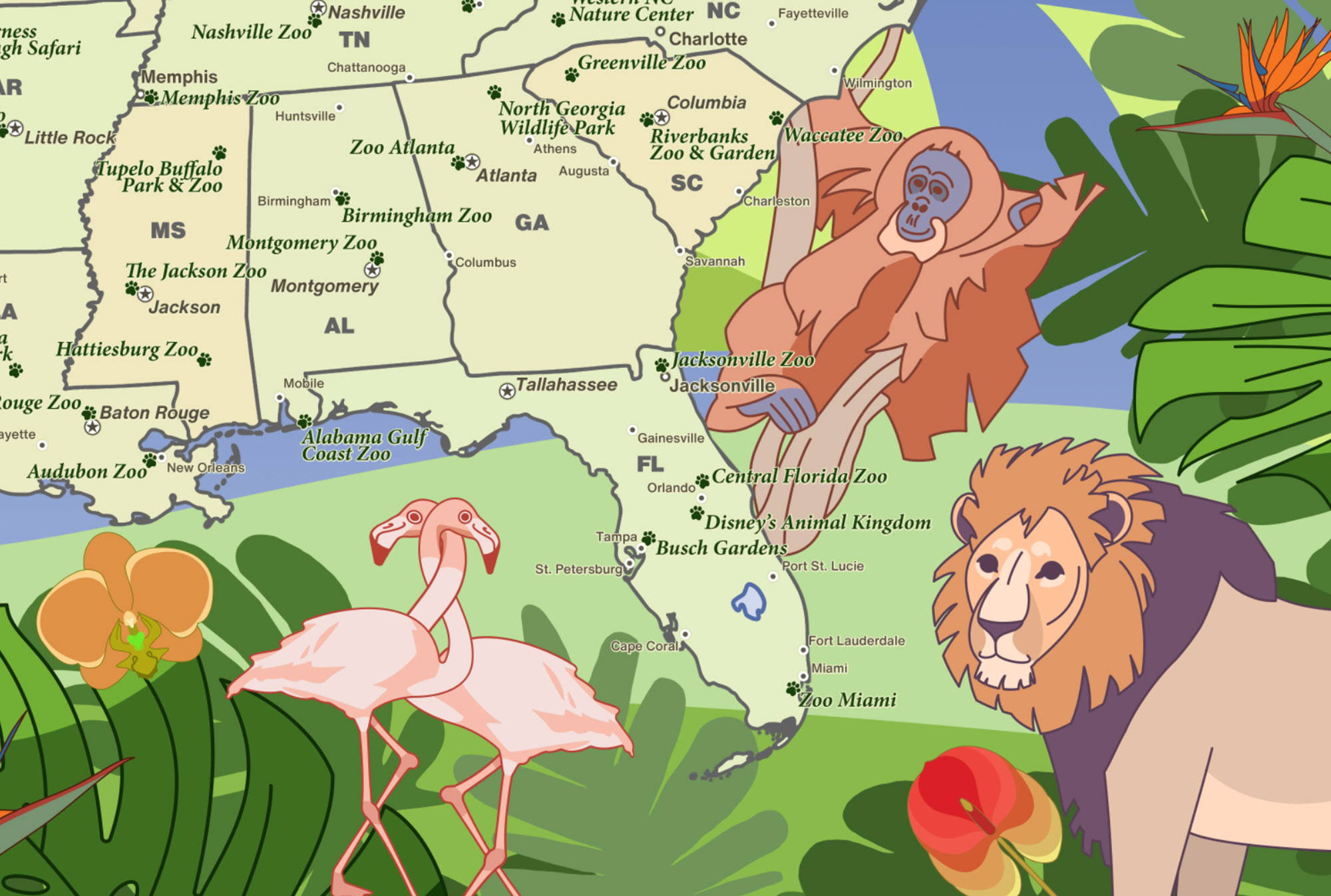