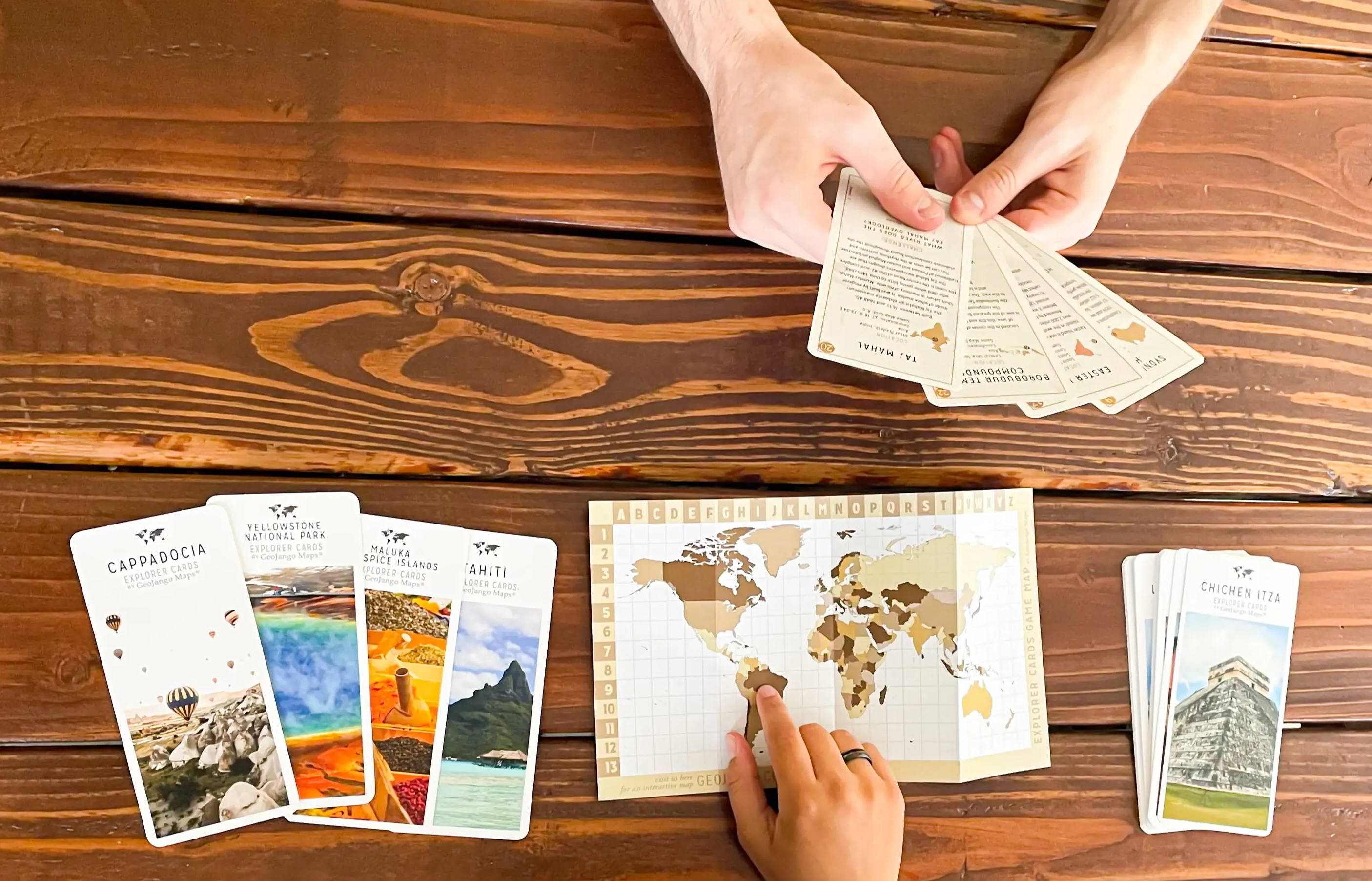 Set up: Gather all the Explorer Cards and each player lays their grid map in front of them.

Gameplay Option 1 (one at a time): The youngest player goes first. They pick the top card, read the card's name and location. The player to the left points to the square on their grid map where the site is located and says out loud the grid ID (i.e. T6). The first player checks the cards Grid ID to see if they are correct. If they answer correctly, they keep the card. If they answer incorrectly place the card at the bottom of the deck.

Gameplay Option 2 (competition): This game play requires only one map in the middle of the table where all players can reach. The youngest player goes first. They pick the top card and read the card's name and location. All other players race to point to the square on the grid map where the site is located and says out loud the grid ID (i.e. T6). The first player to point and say the ID gets to answer first. The card reader checks the card's Grid ID to see if they are correct. If they answer correctly, they keep the card. If they answer incorrectly, someone can "steal" and guess the answer to keep the card.

How to win: Collect the most cards!

Object: Work as a team or individually to arrange the cards in order of how they appear on the World map. Play as a team to build the map or compete to see who can set the best time.

Set up: Gather all the Explorer Cards and find a playing area big enough to lay all the cards out.

Gameplay: Shuffle the cards. Pick the top card from the deck, and read the cards location. Place it on the table in relation to where it is in the world. Keep picking cards from the deck and placing them on the table to match the map!

NOTE: The arrangement will not be in the exact shape of the world, but you will learn the location of these sites and the geography of the world.

How to win: Finish placing all of the cards in the correct location.

Challenge: Set a stop watch and see how fast you can place the cards down in the correct position. Play again and try to beat your previous times. 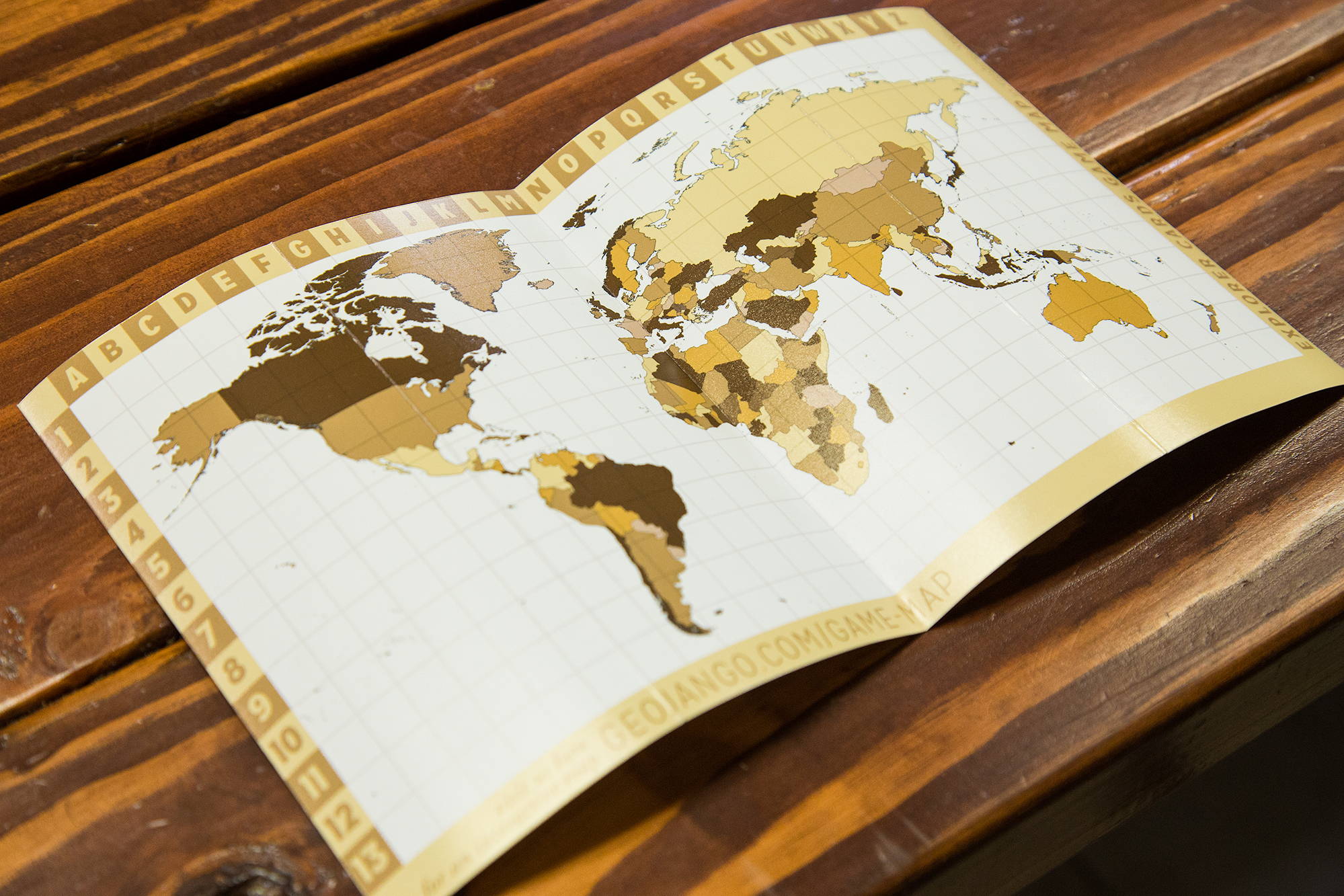 3 players: Players take turns drawing and the two other players guess against each other.

Object:  Help your team guess the correct site within the time limit by drawing hints.

Set up: Gather all the Explorer Cards, writing utensils, timer and whiteboard/paper on the table.

Gameplay: The player who has visited the most countries is the first Drawer. The Drawer pick a card from the middle of the deck without letting anyone else see it. The Drawer studies both sides of the card for 30 seconds. Set a timer for 1 minute. The Drawer begins drawing hints relating to the site (land form, statues, iconic feature etc.). If the team guesses the site correctly before time expires, they keep the card and play again with a new Drawer. When they guess incorrectly, the card is placed in the discard pile, and the other team gets to play. (If you are playing with 3 players and neither player guesses in time the card goes to the discard pile.)

NOT ALLOWED: "Ears" for "sounds like" or dashes to show the number of letters in a word. Letters, numbers, talking, or sign language.

How to win: The team or player with the most cards at the end of the pile wins!

Object:  Help your team guess the correct site and memorize these unique sites

Set up: Gather all the Explorer Cards, a large bowl for all the cards to fit in (this will be the "fish bowl") and a timer. Place 15-20 random cards in the bowl (more or less depending on how long you want to play for). Divide into teams of two.

The taboo round is first up. The goal of this round is to guess as many site names as possible within 1 minute.

The starting team selects a player to go first.

The player will then use words to get their teammates to guess the card. They cannot use any hand gestures — only words. They can’t say any of the words in the name of the card, as they are the “taboo” words. For example, if the word is “Great Barrier Reef” they might say “Coral grows here”

If the team successfully guesses the card, they get to keep the card. If it's too difficult, you can pass and put it back into the fish bowl.

After 1 minute has elapsed, the other team gets their turn. They also have 1 minute to guess as many cards as possible.

Each team continues to take 1-minute turns until all of the cards have been removed from the fishbowl. Each player from the team takes a turn when its their teams try. When the fishbowl is empty, each team counts the cards they have gathered. Each card equals 1 point to their score. After tallying the each team’s score, fill the fishbowl with the same cards and move on to round 2!

The next round is played in a similar fashion, with each team having 1 minute to guess as many cards as possible. The team that went second last time will get to go first this round.

The main difference is that the player reading the cards can only use one word to describe the card. So, if the card is “Great Barrier Reef” this time they may use a single word like “Coral” to describe it. The team needs to remember the words that were mentioned in the first round and use the one word as a hint. The teams continue to alternate with 1-minute rounds each, then the cards are tallied and placed back into the fishbowl.

The next round plays out in the same way, with each team taking their 1 minute turns. The main difference here is that the player with the cards cannot speak. They must use physical gestures to communicate the name of the card. For “the Great Barrier Reef” they might pretend to be coral or fish. At the end of the round, the scores are tallied up once more.

How to win: The team that has the most points from all three rounds is declared the winner.

Starting September 15th, we will be launching our Explorer Card Kickstarter! If you love your cards, consider getting another pack before they increase in price!

They are great holiday gifts, stocking stuffers, corporate gifts or White Elephant/Yankee Swap gifts. Consider funding our Kickstarter at kickstarter.com/profile/geography-cards-game or click the button below! 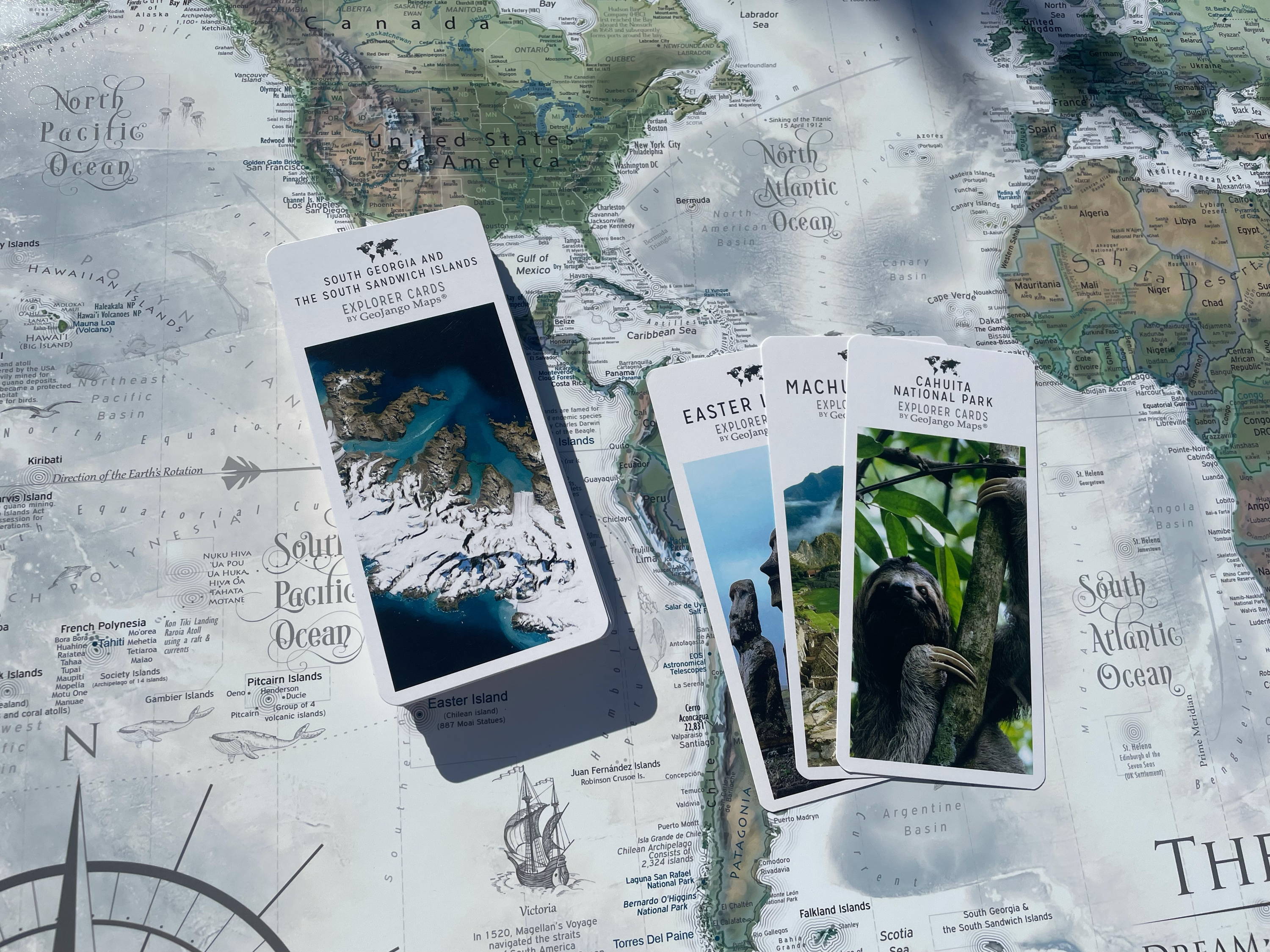 View and print out a copy of your Explorer Card Game Grid Map!